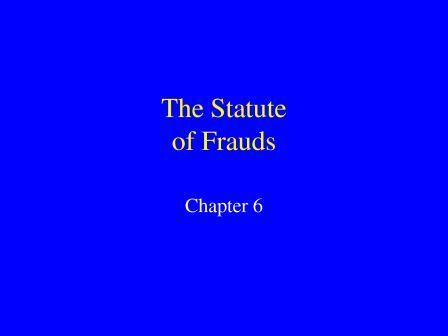 Descriptive of statutes which require certain classes of contracts to be in writing. The purpose of the Statute is to prevent fraud and perjury in the enforcement of obligations depending for their evidence on the unassisted memory of witnesses, by requiring certain enumerated contracts and transactions to be evidenced by a writing signed by the party to be charged. The Statute does not deprive the parties of the right to contract with respect to the matters therein involved, but merely regulates the formalities of the contract necessary to render it enforceable.  Evidence of the agreement cannot be received without the writing or a secondary evidence of its contents. The Statute, however, simply provides the method by which the contracts enumerated therein may be proved but does not declare them invalid because they are not reduced to writing. By law, contracts are obligatory in whatever form they may have been entered into, provided all the essential requisites for their validity are present. However, when the law requires that a contract be in some form in order that it may be valid or enforceable, or that a contract be proved in a certain way, that requirement is absolute and indispensable. Consequently, the effect of non-compliance with the requirement of the Statute is simply that no action can be enforced unless the requirement is complied with. Clearly, the form required is for evidentiary purposes only. Hence, if the parties permit a contract to be proved, without any objection, it is then just as binding as if the Statute has been complied with.

The Statute of Frauds embodied in Article 1403, paragraph (2), of the Civil Code requires certain contracts enumerated therein to be evidenced by some note or memorandum in order to be enforceable, to wit: