Here’s an article sometime February of 2015 from  New York Time’s correspondent. Alexandra Stevenson on the High End Property collapse in Singapore.  as with any property boom, once the speculators outnumber the end users and take advantage of the investment climate a country offers, then sooner or later, a correction is bound to happen.  Add to the fact that Singapore implemented “cooling measures” in order to discourage foreign investments and speculators from investing particularly in the high end market and the effect is now being felt by investors on these high end projects.

I remember an article on “cooling measures” i did three to four years ago when Singapore and Hongkong initiated this and at that time recommended that the our banking system  adopt similar measures.  Of course, it wasn’t a popular article and was frowned by Real Estate brokers / agents locally but it was critical to address the issue then.  The Banko Sentral has already taken measures to reduce the exposure of bank loans by providing only 50%  to 60% of housing loan being released based also on conservative appraisal on current property levels ( there is a townhouse in the Valle Verde area with a market value of Php 18M and the bank appraisal was only at Php 10M ).

Our banking system is one of the most conservative in the world and our Banko Sentral Governor, Amado Tetangco has done a great job despite concerns of a property bubble which we consider far from happening inspite of the shocking property values we currently have.  it’s also unique that the Philippines is looked upon by foreign investors as the country with a good upside and stable financial fundamentals.  can you imagine the forecast by major financial institutions that the Philippines will be amongst the top 10 economies in the world by 2030 ?  this can be attributed to the variables happening worldwide from  China, Europe and the United States.

the same scenario that is happening to Singapore is likely to happen to happen to the Philippine Market if we don’t address important issues regarding exposure to Real Estate Loans which are already up substantially from previous years. however, the Banko Sentral and other major Banks have also repeatedly assured us that our banking systems is safe and far from a property bubble.  even the World Bank and the upgrades done by Moody’s and Standard and Poor atttest to this fact.

for your info, there are very select property  investments that are far from being affected by an oversupply, specially where speculators have land banked.  for those interested in these safer investments, you may email me your interest at [email protected] and i will send you my recommendations for a safe and stable real estate portfolio.

A high-end property collapse in Singapore 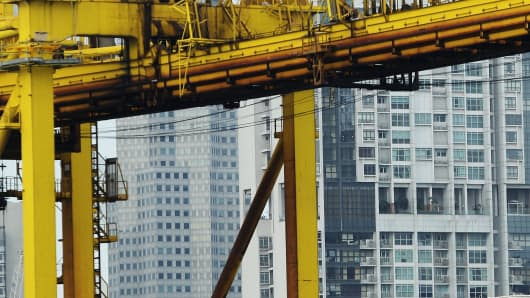 Lamborghinis, Porsches and Bentleys fill the driveways of multimillion-dollar villas in Sentosa Cove. Yachts line the 400-berth marina nearby. A number of homes have guardhouses for security.

But signs of a slowdown are just beneath the shiny surface. The grass on front lawns has turned brown from neglect. Two condominiums last summer went for less than half their original price, while others sit empty.

At the W Residences, one of the newest condominiums, fewer than half of the units have been sold. Walking around a lavish showroom apartment with infinity pool, Sheena Teng, a sale consultant for City Developments Limited, the developer of the W Residences, says that prospective buyers in Sentosa once were rich Asians looking for vacation homes. She said most of the current occupants at the W Residences were expatriate professionals in Singapore — and they are renting.

As Singapore pitched itself as a place for Asia’s rich, Sentosa Cove attracted many wealthy Chinese, Malaysians and Indonesians. But the momentum behind that boom is slowing, putting the gated community at the center of the weakness.

The slowdown has been orchestrated, in part, by Singapore’s leadership.

Faced with simmering discontent over rising living and housing costs, the government executed a succession of cooling measures that have hit the high-end market especially hard.

A property sales tax of 18 percent for foreigners has reduced buyers’ enthusiasm. Levies are nearly as high for those hoping to flip their properties in the first or second year.

“So far, Sentosa Cove has been the worst hit because the market frenzy was probably most apparent there,” said Wee Siang Ng, head of research at Maybank Kim Eng Securities. The value of prime properties rose by 80 percent from 2004 to the market peak in 2013, according to Mr. Ng.

The money started flowing around 2004, after the Asian financial crisis and the SARS outbreak. Seeking to strengthen the city state, the government promoted itself as a center for global finance and private banking, offering tax incentives and other favorable policies to lure foreign companies.

The government also eased rules for foreigners buying land and began to sell reclaimed land on Sentosa, an island just south of Singapore’s main island and a former British military base.

After that, villas rose in all shapes and styles. One house was built like an Egyptian tomb, with two pharaoh-dog guard statues. Others have palm thatched roofs, evoking tiki huts.

Construction continued unabated for years. Developers erected luxury condominiums and marketed the properties as the only waterside living in Singapore. “We call it the Monte Carlo of Asia,” said Stephane Fabregoul, the general manager of the W Singapore hotel in Sentosa Cove. Other parts of Sentosa were being developed too.There was gossip about who splashed money on which homes. Local papers like The Business Times unearthed the names of billionaires behind major purchases, like Gina Rinehart, an Australian mining heiress, and Bhupendra Kumar Modi, an Indian telecom mogul.

In 2010, a Resorts World casino was opened on the main part of Sentosa. Officially, gambling is discouraged in Singapore for its own citizens and permanent residents, who must pay a fee of 100 Singapore dollars, about $75, for each visit to the casino. A Universal Studios theme park was also built in a move to attract tourists.

Across Singapore, the property market was booming. Interest rates were low, prompting buyers to take on more debt. Confidence was high. Banks built regional headquarters in Singapore and jobs were created. Singapore’s skyline changed drastically. A new financial district rose and Marina Bay Sands, a three-tower building housing a casino with a boatlike structure on top, was built for a reported $5.4 billion.

With the government unable to contain the heated market, the growing presence of foreigners and the rising cost of housing became a flash point for discontent. And Sentosa, with its new villas, yachts and luxury condominium towers, became a particular symbol of the rising inequality for many citizens.

In the 2011 general election, the People’s Action Party, which has been the ruling party since Singapore’s independence from Malaysia in 1965, won by the narrowest margin in its history.

Soon after the elections, the government took measures to reduce foreign investment. While it had already adopted broad-based measures to cool speculation, the latest moves were more targeted at the high-end market.

“There was concern that was aired in the last election that foreigners participating in the property market were contributing to high prices,” said Christopher Fossick, the managing director of Jones Lang La Salle in Southeast Asia.

To slow demand, foreign buyers were charged an additional tax on top of a basic buyer’s stamp duty. This tax was raised a year later, bringing the total tax for foreigners to 18 percent.

Today, anyone who wants to resell a property within a year of buying it must pay a 16 percent tax on the sale price. If they sell within two years, the tax is 12 percent. The levy gradually decreases over the following two years.

The most effective measure taken by the government was to cap the amount of debt a borrower was allowed to take as a percentage of their income.

Since then, new property sales across Singapore have fallen strikingly; in 2014, the number of properties sold was half what it had been the previous year. Residential prices fell 4 percent last year, and some analysts forecast double-digit declines this year.

“We would need to see these cooling measures removed before we see some recovery in prices,” Mr. Fossick said.

On Sentosa Cove, few people are buying. Most of the unsold units from recent developments are being leased.

Borrowers are running into trouble as well. In a recent case, United Overseas Bank accused an Indonesian developer, the Lippo Group, of conspiring with buyers at a property in Sentosa Cove to inflate the value of their home loans. In the lawsuit, the bank says 37 of the 38 borrowers have defaulted on mortgages worth 181 million Singapore dollars.

The suit claims that the developer handed out furniture vouchers, which amounted to a rebate of as much as 20 percent of the sales price; the buyers did not disclose the discounts. The Lippo Group has denied the accusations.

have a great day !

Subscribe to my daily postings by filling in your email address at the SUBSCRIBE section located at the mid right hand portion of the webpage of www.robertgsarmiento.org.

Proper Pricing of a Property

Please enter your username or email address. You will receive a link to create a new password via email.